Earlier this year, I spent one whole month in Nepal. It was an unforgettable experience and I look forward to the day when I will get to go back again. I used to opportunity to take some time off to visit majestic Elephants and Rhinos and their friends in Chitwan, indulge in paragliding in Pokhara, to relish the local cuisine, to also verify recommendations from the lonely planet (tell you more about this in a bit),visit a Toastmaster's meeting, participate in the thriving salsa scene in Kathmandu and the best part, work with a local NGO for sometime. Unlike neighbouring north Indians, Nepalis are mainly rice eaters. The traditional Dal Bhat is simply delicious and is definitely worth a try and so are the momos slurrrp,slurrrp. At the NGO, they cooked fresh and healthy food for their employees everyday and I gorged on it shamelessly as long as I was there. As you can tell by now, food is a very important part of my life and I happened to also taste 'the world's best Lemon Merengue Pie' at the Moondance Restuarant in Pokhara. Let's just say it lives up to its reputation!!! If you ever go to Pokhara, try it and let me know what you think. 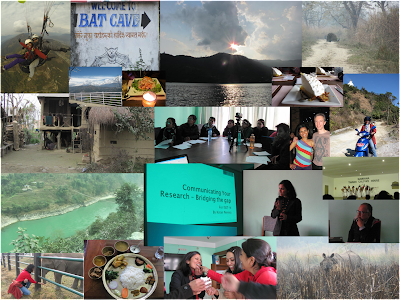 The country faces incredible challenges - infrastructural, political, economic and more. Its location also puts it in a bit of a pickle. It lies between two rising superpowers China and India who sometimes forget to take into account the other party's well-being in their quest to satiate their hunger for resources. Any alliance with one of these neighbours makes the other giant uncomfortable and so Nepal must constantly walk a tightrope in terms of diplomatic ties with its neighbours. I must confess I was ashamed to be Indian when I saw life through the eyes of Nepalis. I spent several weeks living like most Nepalis in sub-zero temperatures during the winter. It was common-place to not have power-supply for 14-16 hours a day! Despite 3 layers of woolens, it was incredibly hard to keep warm at home. Since the timings for power supply varied everyday, it was hard to form a routine for one's day. Life begins to take on a very different meaning in such conditions. You begin to understand the Water-Energy Nexus in a much more powerful way than you ever would when you simply read academic texts. Nepal also imports gas from India and the day before I left, there was major strife in the country because the government has raised the price of Gas by Rs.400 overnight. Gas cylinders which costed 1400 NPR suddenly went to 2000 NPR. It was more than the people could take and they ensured the government was made aware of this.

Coming to the Water-Energy Nexus, it is rather unfortunate that Nepal, despite having tremendous potential for hydro power due to its perennial rivers and the steep gradient of the country's topography, does not get the benefit of it. This writer says:

"The first recorded water resource negotiations between Nepal and India occurred between 1910 and 1920 when British India needed to harness the Sarda (Mahakali) river, which formed the western boundary between Nepal and British India, to develop irrigation in the United Province (now Uttar Pradesh). Nepal agreed to the 1920 Sarda treaty, involving an exchange of territory, but not an advantageous one for Nepal.
India enjoys most of the benefits of the Kosi and Gandak treaties (of 1954 and 1959), leading to the construction of dams primarily irrigating and protecting Indian lands. The outcome was viewed by many in Nepal as a “sell out” of their natural resources (although it was resistance in Nepal that prevented construction of larger dams that would have accrued more benefits to that country). Read more here.

In my personal experience, I found the Nepali people to be extremely generous. I wish my fellow country-men would reciprocate such generosity. Anyway, I also wanted to share my personal experience with water supply in Kathmandu.As I shared earlier, the meagre power supply affects every aspect of one's daily life. Having running water in your taps depends entirely on whether there has been power to pump water up to the overhead tanks. Even when you do have adequate water, the quality of water you receive makes you realize how much you take for granted in other parts of the world! 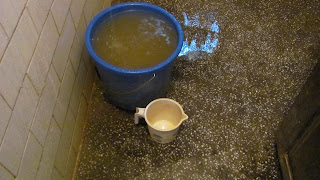 Here is a picture of a bucket of clean water at the house where I stayed. The groundwater in Kathmandu loaded with iron oxides and the locals have devised their own ways to try and purify it. You'd see a filtering mechanism on top of many overhead tanks in Kathmandu. (See picture below)There were days when there was no power to pump up the water and I was forced to re-use the water from the last rinse of my laundry. In normal circumstances I would have gone 'Ewwwwww'. But when you are pushed against the wall, you learn to manage with what you have. It is incredible how such circumstances are completely normal for many while others have never ever experienced anything of the sort in their lives! 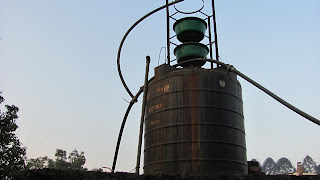 Furthermore, many people in Nepal don't even have the luxury of such tap water at home. They depend on traditional systems of water supply such as 'stone spouts' which date back to 570 A.D. However with rapidly changing land use patterns and lack of ownership, these marvelous systems are swiftly being deconstructed. So that leaves the poorest of the poor in a very vulnerable state indeed. Here are some pictures of one of the stone spouts near the office of ISET-N, the organization where I did a brief assignment. 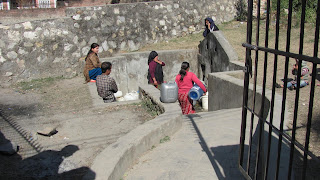 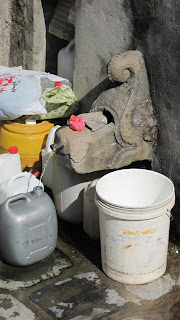 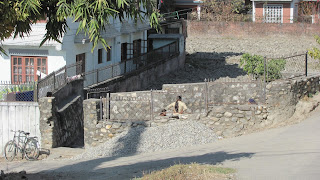 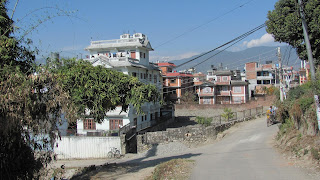 This stay in Nepal has had a significant influence on my worldview and it makes me even more keenly aware of the disparities that we can see around us. But in a sense, it makes me believe in the resilience of the human spirit against all odds and gives me hope for the future.
Posted by Kiran Pereira at 15:54

Kiran Pereira
Although all environmental issues occupy a prominent place in my world, water is a subject that is particularly close to my heart.If I were asked to describe myself in two words, I'd say I'm a water warrior. When warriors are not on the battlefield, they're busy sharpening their skills. I am a researcher who feels compelled to communicate what I study through various media especially writing and public speaking. What I share here are my personal opinions and it is not necessary that people/ organizations I represent share my views on various topics. This blog is primarily intended for a lay audience who are perhaps interested in this field and are looking for some more inspiration, pointers for action. Do read, post your comments here. I'd love to hear from you